Top 5 places we recommend to visit while sailing around the island of Vis are: the town of Vis, Komiža port, Porat (Bisevo), Stiniva bay and Budihovac.

Although it does not have its own marina, it offers to navigation experts an entire waterfront presenting in this way the possibility of becoming part of the day-to-day life of this small town, Vis has become an unavoidable destination when cruising through central and southern Dalmatia.

Most moorings on the waterfront are situated in the Port. Moorings can be found to the east, where the waterfront begins up to around fifty metres behind the customs pier. On the shore there are lockers with connections for electricity and water. Moorings are set far along the shore so even large boats of up to sixteen metres can be moored here. The depth of the sea in this part of the waterfront is between 2.5 and 3.8 metres. Moorings are distracted only by winds blowing from north and north-east whilst the eastern part of the waterfront is less protected. Moorings are also available on the waterfront in Kut. It is equipped with moorings, water and electricity and it has a capacity of thirty boats. The sea along the shore where boats are moored is from 1.5 to 2.8 metres deep. Even this part of Vis’ port is open to winds blowing from north and north-east, but especially for those coming from the north-west and west where sudden summer storms also come from.

Close to the reception a new toilet block has been constructed. Moorings should be paid for at the reception.

The largest bay on the island of Vis, it is completely exposed to the western and south-western winds which create troublesome waves there, surrounded by Knez cape and illuminated by Stupišće, it has the shape of a horseshoe. The only shelter is located in Komiža port, behind the high breakwater reconstructed in 1996 and reinforced with concrete blocks. This has prevented moorings on its peak. The first thirty meters are reserved for fishing boats and larger vessels and from there, a hundred metres on are dedicated for navigation experts. The depth of the sea from the peak of the breakwater to the waterfront lowers gradually from six to two metres and moorings have lockers with water and electricity connections. There are some thirty moorings so that during the summer traffic they are easily filled whilst throwing the anchor in the centre of the port is advised only for the very patient and experienced seamen. In fact, the sea traffic in the most famous fishermen’s town on the Adriatic is almost always more dense then the road traffic and the sandy bottom is full of lay-up blocks. The situation worsens when the strong southerly or south-westerly winds blow so if you are not sure of catching a mooring, it would be better to delay your visit to Komiža for a while.

Porat or the port on Biševo is a sandy bay located on the islet of Biševo and an excellent choice for an overnight stay if you are sure of the good weather conditions. In fact, it is completely open to the south-western wind, however when the landward breeze blows strongly, the sea in the bay is quite rough. You can spend a number of days anchored here as they bay is well protected from other winds. Although during the day in high season, be in the very centre of the tourist offer of the Vis aquatorium, after five pm, when the excursionists’ board their boats that will take them back to Komiža or Vis, everything suddenly fades away and only local guests and navigation experts stay in the bay. The sea here is quite shallow and this is why it is not recommended to anchor forty metres from the beach. There is enough space for well anchored ten boats.

The inviting bay can be approached only by boat or by foot. With no automobile access, the bay’s natural beauty has been well preserved.

There’s a small and charmy restaurant bar in the bay, ideal for enjoying refreshments in the shade.  We recommend to visit Stiniva bay is in the morning hours when there is plenty of sun. The fresh appearance of the blue-green sea beside the white cliffs looks magical.

In the middle of the mini archipelago whose numerous islets and cliffs make the south-eastern part of Vis so special, on the island of Veli Budihovac is real little paradise for sailors. It is one of the most beautiful lagoons on the Adriatic with its pebble pearl beach. Protected from most winds and additionally hidden by Mali Budihovac and Sank cliffs and the shallow waters between them, the lagoon on Budihovac is a pleasant site for anchoring and an idyllic port worthy of spending the night. When you approach it, you must pay attention to the many areas of shallow water around Mali Budihovac and when you throw your anchor into the lagoon itself, you must bear in mind that, during low tide, the sea, at some points, lowers and reaches two metres. Those who like to spend time alone can find this lagoon on the eastern part of the island in a small bay opening towards the south, but protected from the landward breeze. On a sandy terrain in Budihovac is the grape variety plavac mali so it would be a pity not to try a glass of red wine from this special micro location. 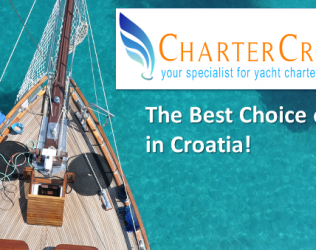 The best Choice of boats in Croatia